Protein has two components associated with it, namely the quantity or protein content and the quality of this protein. Both are affected by the levels of nitrogen and sulphur in the plant as it develops through the season.

High levels of grain yield are known to dilute the quantity of protein in the grain so it is critical to assess the expected yield as the crop approaches the grain filling phase. When managing the protein quality, the main aim is to get the plant to produce protein that contains the high molecular weight, long chain gluten proteins. Gluten proteins, e.g. gliadin, glutenin, albumin and globulin give wheat products unique extensibility and processing properties.

The two key nutrients that influence grain protein content and quality are nitrogen and sulphur. Agronomic practises need to ensure optimal nitrogen fertilisation is conducted when the plant can still incorporate the nitrogen into its grain, and that sulphur nutrition is adequate to ensure this does not limit nitrogen use efficiency.

Nitrogen is a fundamental component of amino acids that are the building blocks for grain protein. Its management is thus critical in growing wheat with high protein values. Grain protein is particularly helpful in indicating whether crops are receiving optimal nitrogen management. As the optimum nitrogen supply changes (due to economics), or as applied nitrogen differs from the optimum, grain protein changes typically by about 1% for every 50kg N/ha. 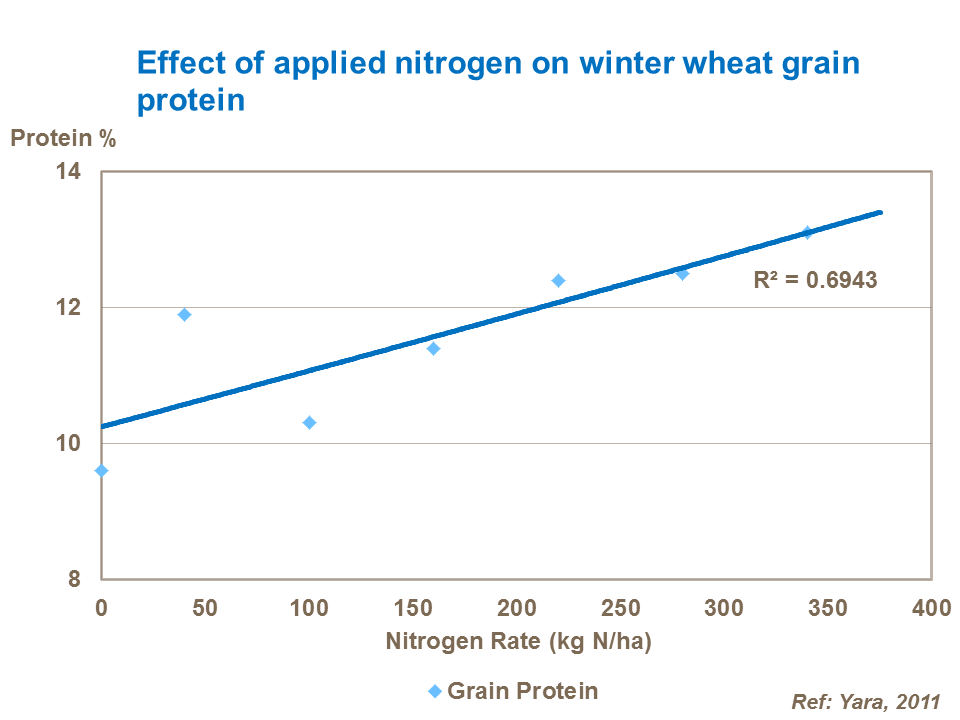 To achieve higher protein more nitrogen is required to fulfill the higher demand. The total nitrogen demand by the crop is of course a function of the target yield as well as the protein. Grain protein with optimum N for yield in feed wheat is consistently around 11% (equivalent to 1.9%N). However bread making wheat optimizes for yield at around 12% protein and will often need extra nitrogen to achieve a market specification of over 13%. Low grain protein i.e. less than 10% for feed varieties, indicates sub-optimal nitrogen use. 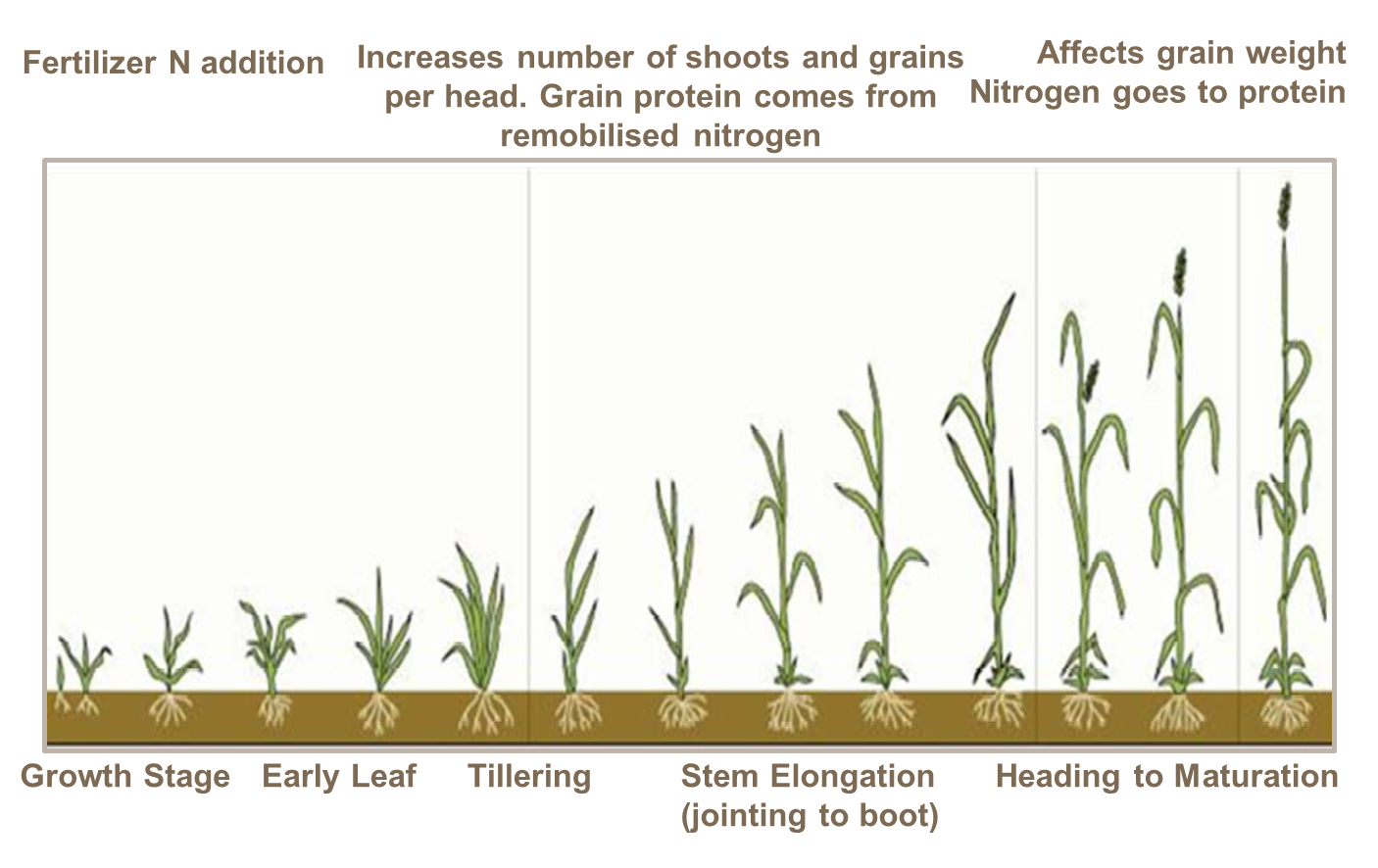 The timing of the nitrogen application is important. Early nitrogen (Zadoks GS 25-32) will be used mainly by the plant for yield attainment , whilst for increasing grain protein applications should be made between Zadoks GS 37 and 59. Where leaf levels of nitrogen are not maintained remedial action can be taken through applications of foliar nitrogen products timed around anthesis (Zadoks GS 70).

Sulphur is a major component of proteins and is therefore important in protein quantity and quality. It is found in some of the key amino acids that give dough produced from wheat grain its baking properties. Examples are cysteine, methionine, threonine and lysine. 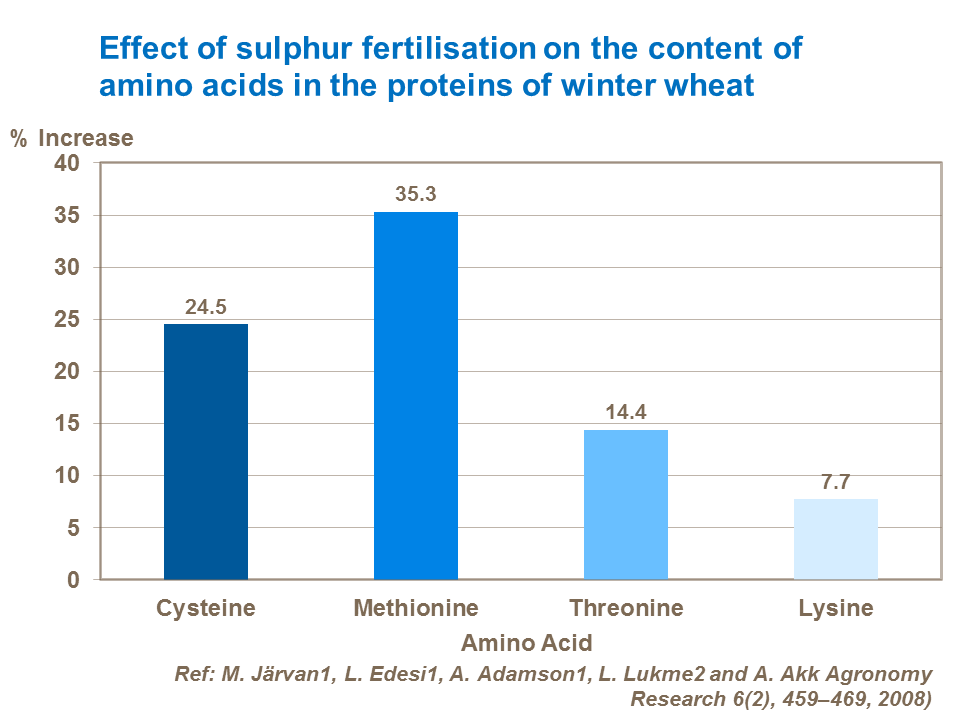 Manganese and zinc both play an important role in plant processes, including the metabolism of nitrogen. Improved nitrogen metabolism increases the amount of nitrogen that is incorporated into the developing proteins. 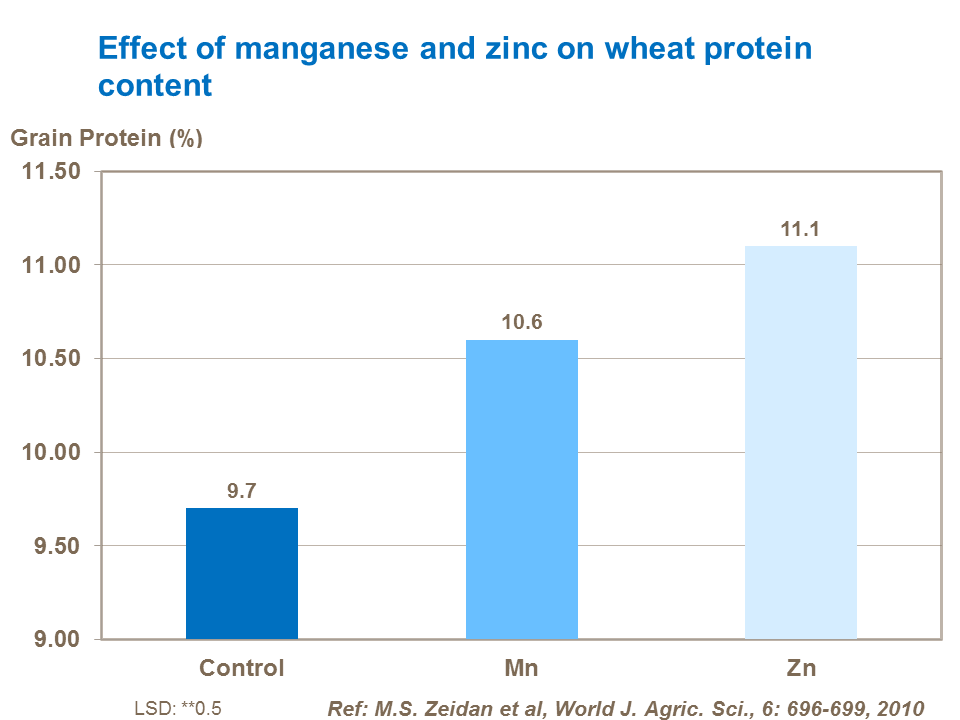